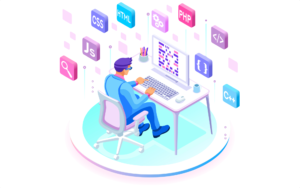 A web developer is a programmer who specializes in, or is specifically engaged in, the development of World Wide Web applications using a client–server model. The applications typically use HTML, CSS and JavaScript in the client, PHP, ASP.NET (C#), Python, Go or Java in the server, and http for communications between client and server. A web content management system is often used to develop and maintain web applications.

You may have thought about learning a programming language or two and becoming a web developer. Luckily for you, we understand that aspiring web developers will have questions about the profession, which is why we have put together this comprehensive guide, which aims to answer the above questions and more. We will look at the types of web developers, and we will look at the web design vs web development debate. We will also cover some of the most popular programming languages for aspiring web developers, including Python, JavaScript, and HTML
A web developer or programmer is someone who takes a web design - which has been created by either a client or a design team - and turns it into a website. They do this by writing lines and lines of complicated code, using a variety of languages. Web developers have quite a difficult job, because they essentially have to take a language we understand, such as English, and translate it into a language that a computer understands, such as Python or HTML. As you can imagine, this can take a lot of time and effort and requires an intricate understanding of various programming languages and how they are used. Different types of developers specialize in different areas, which means that large web projects are usually a collaboration between several different developers.
Unfortunately, the question “What does a web developer do?” doesn’t have one simple answer. As noted above, there are some different types of web developers, each of which focuses on a different aspect of the creation of a website. To understand what is a web developer it is crucial to know that the three main types of developers are front-end, back-end, and full-stack. Front-end developers are responsible for the parts of a website that people see and interact with, back-end developers are responsible for the behind the scenes code that controls how a website loads and runs, and full-stack developers do a bit of everything.
Get a free quote now.